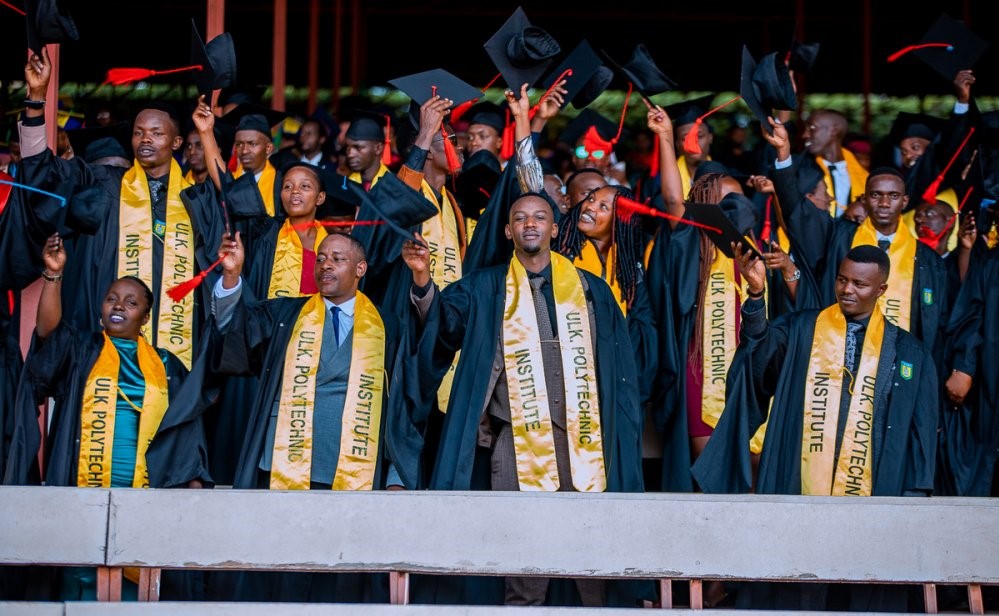 On 16th December 2022, Kigali Independent University and ULK Polytechnic Institute (UPI) respectively held their 19th and 6th Graduation Ceremony in which 961 graduates were awarded advanced diplomas and degrees in various fields of specialization. The graduation was officially opened by Prof. Kalisa Mbanda who is the Chancellor of both institutions.

“Rwanda’s position in the world’s economy and technological advancement depends on higher education products. This is why Rwanda considers quality relevant and technology focus in higher education very vital for transformation. We acknowledge the progress and achievement made by ULK, and we would like to take this opportunity to stress the necessity that we are ready to continue to work together.”

As it was revealed, ULK and UPI have so far sent more than 38 thousand graduates to the marketplace where they are serving in various capacities.

Speaking at the function, Prof. Dr RWIGAMBA Balinda, Founder and President of ULK and UPI stressed that his success depends on the strong faith he has in God. He therefore invited the graduands to emulate his example.

“I get strength to do anything I want from Christ. So, Christ gives me strength to achieve my projects. When you have faith you get internal permanent force, vital force. You get external force to do great things. For example to come this date of graduation, it has taken you a lot of commitment, hard work from year one up to this end. So, you have met challenges but because of your faith in your project you said, I can never give up. I must go on. So faith is something so important for you to pursue other projects in front of you”, he advised the class of 2022.

This graduation is the first physical graduation in the post-COVID period. The last two graduations were held virtually as the pandemic was still wreaking havoc.

The Vice Chancellor of Kigali Independent University, Prof. Dr NKUNDABATWARE Innocent put it that the graduation became possible through the good manners showcased by the graduating class.

“This event justifies your level of resilience, discipline, commitment and hard work, with regard to this, I’m confident that the future is promising for you all graduands and laureates”, he said.

During the function, it was underscored that ULK and UPI have made a great step forward to become international academic institutions as they currently accommodate more than 25 nationalities. Students from across the global have found the two institutions their preferred schools for their desired future.

The Principal of ULK Polytechnic Institute, Eng. MUSABYIMANA Jean Pierre, underscored that the idea to put UPI in place was to provide the labour market with competent human capital equipped with job creation skills.

“The goal behind the creation of this polytechnic institute was to produce competent hands on skills personnel endowed with job creation spirit. Given this therefore, our graduates are expected to render the world better by providing it with solutions using the acquired knowledge and skills”, he told the audience.

The function climaxed in a group photo which was taken shortly after the Chancellor had dissolved the congregation.