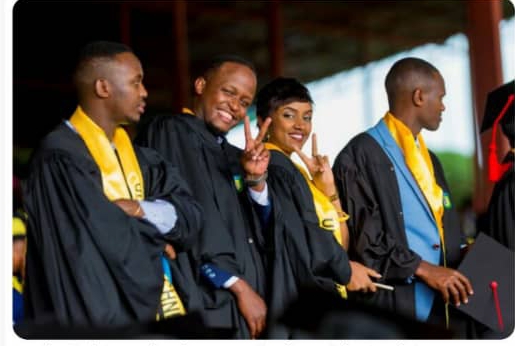 On 13th December 2019, Kigali Independent University and ULK Polytechnic Institute respectively awarded degrees and advanced diplomas to graduates who successfully met all the academic requirements along the 2018-2019 academic year. The graduation ceremony in question was the sixteenth for Kigali Independent University Undergraduate section, the sixth for master’s programme and the third for ULK Polytechnic Institute.

The glamorous event was officially declared open by the Chancellor of ULK, Prof. Dr. KALISA Mbanda who requested the graduates to utilize the acquired knowledge and skills in building their respective countries.

“As you make it to the marketplace, I’d like to request you to use the knowledge and skills got from this institution in building your countries. Make ULK and yourselves proud by playing a role in building your respective countries. We expect you to be good ambassadors through your deeds”, he urged the excited graduates.

In his welcome remarks, Dr. SEKIBIBI Ezechiel, the Vice Chancellor of Kigali Independent University ULK, told the attendees that ever since ULK was founded, more than thirty four thousand students have graduated from it and they are currently playing their role in bettering people’s lives.

Speaking on this occasion, Dr. KARAMBIZI Sylvestre, the Principal of ULK Polytechnic Institute, said that the graduates are solutions to the problems hindering people’s lives today.

“At ULK Polytechnic, we do not consider this as just graduating. We consider the numbers as solutions sent across the country and beyond the borders to contribute to the development agenda by solving problems”, said the Principal.

Delivering the message on behalf of fellow graduates, Mr. Emery IRANYURANYA Acension, said that not only did they get classroom knowledge from ULK but they also had chance to involve in some extracurricular activities such as debates whereby they won various competitions including the National Debate Championship which earned them ticket to Ghana Continental Debate Championship.

” As I am speaking, two of our girls – Erica KABANDA and Ariane Douce NISHIMWE – are currently representing Rwanda in the Pan African Debate championship taking place in Accra, the Capital City of Ghana. Before that, they won the National Girls’ Debate championship that took place last year.”

The Founder and President of ULK, Prof. Dr RWIGAMBA Balinda, said that graduating is one thing and being successful on the marketplace is another. Hence, he told the graduates that they need to be equipped with a number of weapons to be able to stand tall on the marketplace.

“You need to have faith in yourself, your project but most importantly faith in God. Without faith your project can hardly bear fruits. Besides, be endowed with values such as integrity, patience… and your projects will leapfrog”, he tipped the graduates.